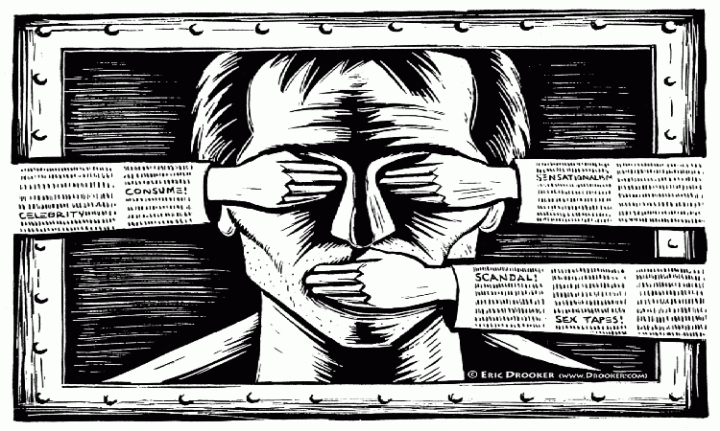 Pen Myanmar released a report on World Press Freedom day last week.  The report reflects on the progress – or otherwise – on media and public freedoms in the one year since the NLD came to power.  Participants included journalists, lawyers and media experts from 14 organisations ..,

In looking at six indicators: laws and regulation, media independence and freedom, digital freedom, freedom of assembly, speech and opinion, right to information and safety and security, the panel assessed the performance of NLD government in an area which they long have controlled the moral high-ground over previous incumbent governments.

The report covers too wide an area to go into detail, but broadly, it notes successes in some areas.  There seems to be no longer a state protection of religious extremist groups like Ma Ba Tha which have consequently seen their influence wither.  The amendment of the Peaceful Assembly and Peaceful Procession Law has made it easier to hold protests, but just as the abolition of pre-publication censorship allowed writers to publish want they want, there are still repercussion to such actions.  Special branch officers still attend events and protests, recording and questioning as they did in the ‘old days’. Though journalists on the panel agreed that surveillance is less of a worry under the NLD.

Many participants noted the discrepancy between central directives and on the ground implementation, with local officials often dis-regarding the laws (a practice common under Thein Sein).

Access to conflict areas is still a concern, with many journalists barred from those zones in Rakhine State, Shan State and Kachin where the military is operating almost without impunity.

The continuing competition with state supported media (and all the benefits they receive; licence less operations, discounted products, enhanced advertising, access to printers and papers) was also raised.

The report also recommends the review of existing laws that harm freedom of expression, such as the Penal Code, the 2013 Telecommunications Law, the 2014 Printing and Publishing Enterprise Law, the 2014 News Media Law and the 2004 Electronics Transaction law, laws which the NLD themselves have been using to silence their own critics over the last year, an unhappy irony given the abuse of these laws by their predecessors was once a rallying call for the then barred NLD.  This tick in defamation cases, brought by NLD officials and the public (often in the form of revenge attacks) has, according to the report, increased a continuing trend of self-censorship.  A difficult term to quantify and record, self-censorship may be one reason for Myanmar’s surprise rating in the latest Reporters without Borders list, which ranked Myanmar media as the third ‘most free’ in ASEAN (a report itself which seems to ignore the continuing lack of justice on the death of journalist Ko Par Gyi and the death of two other journalists in Myanmar since).

Overall, participants in the report state there has been no progress in 4 of the 6 indicators, with very little progress in the remaining two (laws and regulations/freedom of assembly, speech and opinion).

Though this Pen Myanmar report goes beyond media concerns and into the public sphere, the majority of the participants are from media organisations, and any comments and recommendations on freedom as a whole can also be tied to the more narrow lens of the media experience.  It should also be noted that this is the first of such reports, and the assessment acts more like a baseline for future reviews, rather than a comparison of previous opinions.

Ultimately, this is not the report that many external observers (particularly the foreign media) may want to see.  The Reporters without Borders alternative fits with ease into a preferred narrative that freedom of expression, of assembly, of speech and opinion, of the right to information and privacy, the right to write without fear of punishment have all improved under the NLD government.  This PEN Myanmar report says otherwise