View all posts by Lucas Stewart

Complete a circuit of Sule Pagoda in the heart of Yangon and it’s impossible to miss the three buildings that dominate the roundabout: the Sunni Jamae Mosque, City Hall and the Tourist Burma Building.  The last of the three, on Sule Pagoda’s south side and taking up an entire city block, is emblematic of the twisting histories of the city’s grand colonial era buildings: from riches to rags to restoration.

Built in 1905 by a wealthy Indian merchant, the building was originally named Fytche Square Building in honour of the former High Commissioner of British Burma and its position on the western side of the similarly named park (now Mahabandoola Park).  It was then sold to a Burmese businessmen who turned it into Myanmar’s first Burmese run department store, one that would compete with its foreign rival, Rowe and Co. just across the park.

In the 1920’s it became the office of the Dagon Journal, arguably one of the most influential literary and artistic Burmese language journals of its time, championing the early careers of some of the most influential pre-war writers, including Daw Khin Myo Chit who published her first short story in the journal.  Many of these writers would go on to affix the journal’s name to their own pseudonyms as a mark of respect for the journal and a testament to their status as writers, such as Dagon Khin Khin Lay and unofficial literature laureate Dagon Tharya. 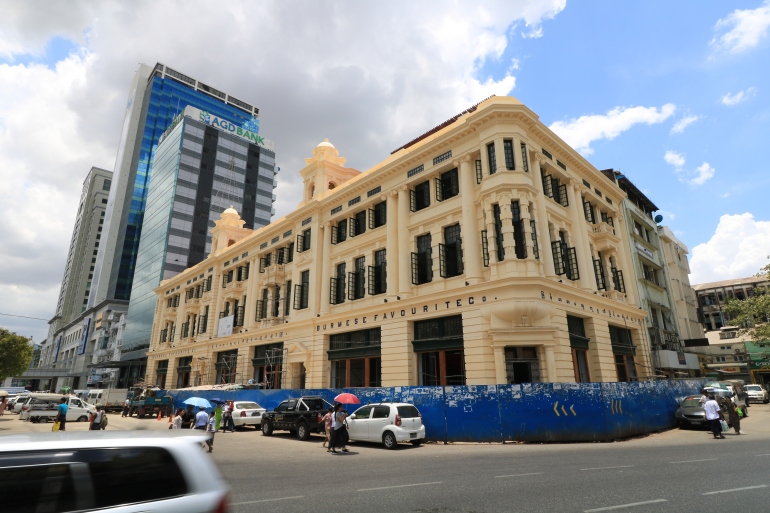 The journal didn’t survive the tightening of censorship in the socialist era, and eventually closed down.  As did the department store.  The building was repurposed under the Ministry of Tourism (where its current name derives from), until all ministries were transferred to the new capital Naypitaw in 2007 and it was left, essentially, abandoned.  The roof was removed sometime around 2013, and with no glass in the windows, left open and exposed to the monsoons, and given its prominent position, it was assumed the building would be torn down and the land sold off for a modern high-rise.  Yet, in 2018, in a collaboration with local architectural preservers Doh Eain, the building is currently undergoing a huge restoration.  With no word on who will occupy it, there is more than enough room for a 21st Century Dagon journal. 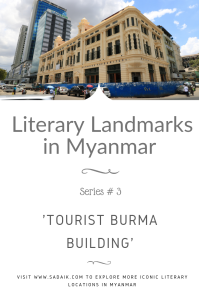