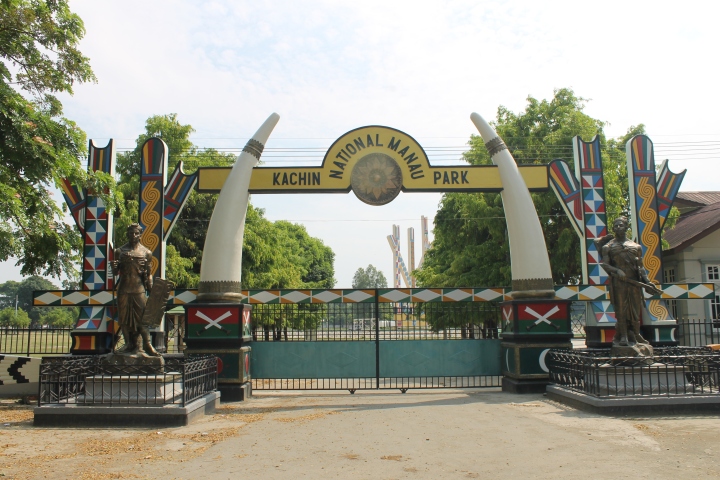 The Kachin, an umbrella term for the six ethnic communities who live in Myanmar’s most northerly state, were once led by Duwas or clan chiefs.  As well as governing their lands and the villages on it, the Duwa’s were also cultural guardians, commissioning Jaiwa’s – storytellers – to recount the epic oral myths and authorising the Manau celebrations.

Since the Kachin rebellion in 1962 the influence of the Duwa’s has waned, replaced by pastors and politicians.

It was a Duwa family, the Kareng, whose lands once stretched from Myitsone to Mogaung and were once considered among the strongest of the clans in Kachinland, who donated a parcel of their lands after independence to be used by the Kachin community for the preservation of their culture and literature (a prescient gift, given the later decades of cultural suppression).

This plot of land became known as the Kachin National Manau Park.

Along the periphery of the park, as it slowly banks down towards the Irrawaddy River, there is a collection of two-storey wooden houses.  Each of these are centres for Kachin literature and culture.  One is the main office of the Manau Organisation Committee, another the site of the Wungpawng Shingni, an independent arts collective, a third is the office of the Kachin Dictionary Committee, which has just completed an epic 15 year project to standardise the Kachin/Jinghpaw language and literature.  Wood carvers work outside the buildings, their seats and statues can be seen at the restaurant that overlooks the Irrawaddy.

If you enter the park from the main gates opposite the Kachin Independence Army’s Technical Advisory office, the park itself is dominated by the tall, multi-coloured Manau posts.

Though Christianity forms a large part of the Kachin identity, their earlier, animist traditions are still acknowledged, no more so than in the Manau dance.  Originally a Manau would only have been convened by the local Duwa.  The type of dance dependent on the Duwa’s reason for organising it: for peace, for war, for reconciliation, for prosperity.

The National Manau is now an annual tightly choreographed spectacle, with thousands of participants threading and winding their way around the posts (when of course the previous regimes allowed it be held and who would often cancel the festival out of ‘security concerns’)

The posts were built after the 1994 ceasefire between the Kachin Independence Army and the military regime as part of the concessions to the agreement.  Manau posts were traditionally made out of wood, though here, at the National Manau Park, they are constructed out of concrete.  The symbolism is unavoidable.  The Kachin were literally staking an enduring cultural and historical claim to their land.

Though how enduring is questionable – an earlier set of concrete Manau posts in Northern Shan State was blown up by the Tatmadaw.

To find out more about life with writers and poets from the nation’s censored borderlands why not buy my award-shortlisted politico-literary travel book ‘The People Elsewhere: Unbound Journeys with the Storytellers of Myanmar’ (Penguin/Viking, 2016)