View all posts by Lucas Stewart

For centuries, the Chin people, who now live in the hills that border Bangladesh and India, were animist, tracing their own oral histories that began when they left their original ‘chinram’, or homeland, a dark cave.

When the Christian missionaries came, following the British imperial invasion of the Chin Hills in the last decade of the 19th Century, their first mission took root in Hakha, now the capital town of the Chin Hills.

Though the Chin did at first reject the missionaries and their teachings, over the next few decades the Chin Hills would prove to the most successful of all missions in the country.

Those first missionaries and first converts have achieved semi-divine status in the reckoning of Chin men and women and they are honoured in the Siangbawi Than.

Carson Hall, a giant, brick and wooden hall named after the Arthur Carson, the first foreign missionary to the Chin people, was built on the only sizeable piece of flat land that exists in this hill-town.  Across the parade ground is the Baptist Church.  Behind the church, a path winds through pine trees and rhododendron bushes to a crest in the hillside.  On this crest, is a stone and wooden structure in the shape of an alpine lodge. 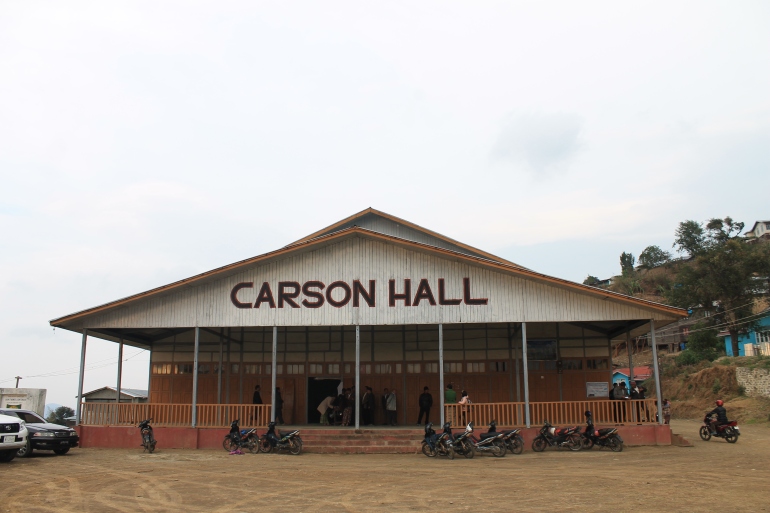 This is the Siangbawi Than.

To enter, you will need permission and a set of keys from a man in a small wooden house opposite the Siangbawi Than.  In the atrium of the lodge there is a small bookcase with Lai Hakha language bibles and sermon books.  These texts, written in the script devised for the Lai Hakha community by Arthur Carson, are used by the town who come to the siangbawi than to pray for the men and women inside.  This is the script that is now used by some of the leading contemporary Chin writers, from the novelist Joel Ling to the poetess Anna Biak.

Inside the lodge are 10 grave and memorial tombs, horizontal, with black and white photos nailed above them on the walls.  Where no images were available drawings of the deceased have been hung instead.  Each tomb has a vase fresh flowers placed next to them. .

Among the remembered is Arthur Carson, the first American missionary to Hakha, who died in the town in April 1908.  Next to him is the memorial grave of his wife, Laura, who left Hakha in 1920 and returned to the USA.

Next to her is Saya Shia Khaw, supposedly the 1st Chin convert to Christianity who died in 1952, though the Siyin community further north in Thuklai say the first convert was from their village.

Next to Saya is Rev. Van Lo, Laura Carson’s first convert who died in 1999 at the age of 100.  The Carsons’ two children, who both died in Hakha are also remembered.

Hung around the walls of the lodge are photographs of all the serving foreign missionaries to the Hakha mission, up to Mr Johnson, the last of the missionaries, who was eventually expelled by the Ne Win regime in 1966, along with all other missionaries who had entered the country after 1947.

This is a hallowed and revered place for the Lia Hakha people (and any visitors should treat it as such).  A position proven no more so than after the deadly landslide of 2016, when up to a third of the town slipped away from the hill-side it was built on.

The Siangbawi Than was left untouched.

To find out more about life with writers and poets from the nation’s censored borderlands why not buy my award-shortlisted politico-literary travel book ‘The People Elsewhere: Unbound Journeys with the Storytellers of Myanmar‘ (Penguin/Viking, 2016)